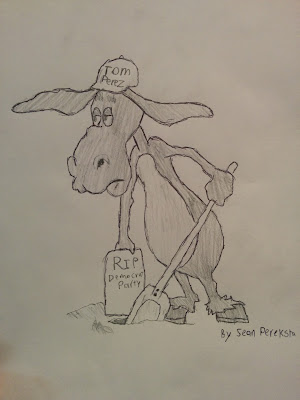 In an age where the Establishment is hated, and the anti-establishment wins the presidency, it would seem an odd choice for the Democrats to pick someone such as Tom Perez as their new DNC organizer in chief, however, as it would turn out, Democrat party leaders dont seem to care much for the boiling distaste against the establishment that can be found even among the ranks of democrats. There were two major candidates for this position, one Keith Ellison, who was pushed by Bernie Sanders and people of his ilk, Keith definitely has his own baggage, but then of course Tom Perez was the other major candidate, and eventual winner of this position. Tom Perez is the definition of establishment, a party insider, supported by Biden and Obama, you can't get much more establishment than that.
This is not to say Tom Perez is ineffective, even National Review has went as far as to say he is an "effective advocate and skillful infighter for his beliefs." However despite these attributes, This choice could be dangerous. The DNC has already dangerously disparaged Bernie and his supporters, going as far as to collude behind Hillary, with Dona Brazille even feeding Hillary questions before the debates, Now the DNC has rolled out a new Organizer in chief, with only 17% of Democrat voters even being aware of this election. To insult Bernie and his supporters through dishonest and effectively rigged primaries and unfair support for Hillary from the DNC was already one blow to many for the DNC to deliver to the anti-establishment Bernie Supporters, but now to roll out another Establishment man, further angering the hordes of "ignorant Basement dwellers" as Hillary called them is going over the edge. The Democrat Party likes to play the game of demographics, it claimed in 2008 that the Republicans would never win back the house and senate, it claimed in 2016 that the republicans would never win another election, the fact is that the Democrat Party already has dangerously misjudged just about everything since 2008, and yet it is still confident enough to toss Bernie supporters into the garbage.
It is very likely that the Democrat Party could rebound, with anti-trump prejudice at an all time high, Democrats are going to be surging in 2018 mid-terms, however, with the election no longer between Trump and Hillary, and only 8 seats in the senate currently held by the republicans at risk compared to 25 for the democrats, the DNC may be burying itself even further then it already is. The Republican party is already the strongest it has been since the 1920s, it would be wise of the Democrats to show some prudence in their major decisions rather than alienating half their base.