One such media outlet that may pander a bit is Huffington post. It seems Common sense to say that perhaps Huffington post is fairly left leaning, most everyone would agree.

Another agreed on Logical statement would be to say that calling someone susceptible to believing fake news is the same as calling them gullible or naive. To expound upon that strain of logic, most would also agree someone who is gullible is not as likely to be intelligent. Basically, saying that one group is likely to believe in fake news is the same as calling that group ignorant and less intelligent than say, a group that would not believe in fake news. 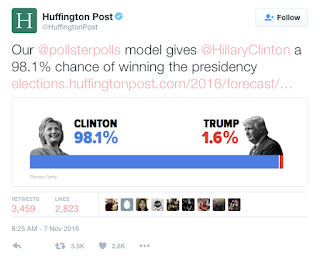 Huffington post has a knack for pandering to its audience. Giving Trump a merely 1.6% chance of winning was just one of those moments. It even went as far as to attack Nate Silver who was giving Trump chances within the double digits of winning.

"By Monkeying around with the numbers like this, Nate Silver is making a mockery of the very forecasting industry that he popularized." -Huffington post

What a quote! Mocking an incredibly qualified and credible man in the area of forecasting because he gave Trump a chance of winning. Embarrassing maybe? This is a direct manifestation of the pandering Huffington post tries, Trump was within the margin of error in most all polls, and so to give him almost no chance of winning was irresponsible, but it sure made Huffington Post Readers happy. Many people read certain outlets just to hear what they want to hear, it's called confirmation bias. You merely confirm what you already believe by listening to something that agrees with you. And thus clearly Huffington post is pandering. I despise the Term "fake news" in most cases since it is used to demean generally bias yet reliable news stations like CNN which clearly leans left, and may push an agenda, however it does not lie to its viewers on any regular basis, it just feeds them what they generally want to hear.

So if Huffington post Readers are Left leaning as all common sense would indicate, just how far left are they?
Well, REALLY FAR LEFT. The type of far left in which they believe the other side is ignorant, the intolerant far left.
A poll by YouGov studied Americans opinions on which side they believed was more likely to believe fake news, Liberals or Conservatives. It seemed Strange to me because Huffington post gives the results from YouGov for the nationwide study, and then the results for on Huffington Post readers that answered the study, and it seemed self-discrediting.