Gun Control is a bit inefficient

Gun Control, the idea that making a law can prevent people from breaking the law. Of course Gun Control is a deterrent, it blocks people from attaining a gun to easily and that is of course important. It should be a bit difficult to obtain something that can harm someone else, however, Gun Control may have gone to far.

Remember the Constitution? Remember the bit that says "the Right of the people to keep and bear Arms, shall not be infringed". Maybe you remember that, but you probably would fail to bring the part that says "Except in places where the government doesnt want you to have a gun" to memory. Perhaps that's because there is no part in the entire constitution that lays that out. I fail to see how the words "Shall not be infringed" is interpreted as, "Shall be infringed where ever government deems it be infringed." For the side that appears to be most prevalent in the education system currently, the Left sure has an odd time interpreting things such as the constitution, sadly many on the Right that could be influential are too busy starting businesses to worry about politics. According to the Small Business administration, small business Owners are 25% more likely to be Republican, and Trump won small business owners by around 20% according to polling by Manta, a small business social network.

One of the largest, and easily most unconstitutional branches of gun control is Gun free zones, areas where the right to bear arms is very, very much infringed. What is really idiotic about this whole idea is not that people can't carry guns in an area, it's the fact that only law abiding citizens abide by the law, a criminal who would actually shoot someone, or plans on shooting someone would certainly never care if the place where the criminal chose to bring the gun was a gun free zone. The idea that someone who plans on shooting people, which is very much illegal, would try to keep to the laws and not bring a gun to a place where he/she knows that all law abiding citizens will be unprotected is ignorance at the highest level.

One bright senator, Dianne Feinstein makes a clearly watertight argument for gun free zones, "When a Gunman realizes that nobody else is armed, he will lay down his weapons and turn himself in, that's human nature." Clearly all criminals intent on killing others are highly sentimental people that would feel guilty if they shot an unarmed person, Wow! This is the kind of highly intellectual thinking that brings forth gun free zones. Sadly, facts don't necessarily agree with Dianne Feinstein. According to Crime Prevention Research Center, only about 1% of mass Shootings happen in areas where citizens have the right to carry a firearm, around 80+% of mass shootings since 1950 have occurred in gun free zones, mass shootings being any shooting that includes 4 or more victims. Police are essential in stopping a shooter, but in many gun free zones, the response time can be multiple minutes for a police officer to arrive, which is simply to much time given for the shooter.

Not only are Gun Free zones unconstitutional, but it is blatantly clear that they are breeding grounds for danger and only give the shooter a sense of safety. Only law abiding citizens abide by the law, the very definition of a criminal is someone who breaks the law, why on earth would we expect a criminal to adhere to laws when breaking them would give the would-be shooter free reign in an area with no one to resist them. 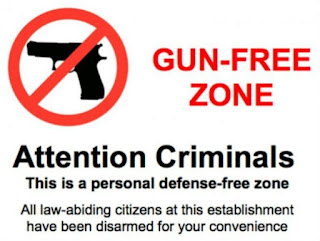