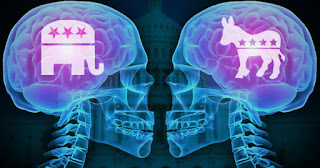 It seems commonplace in schools today to hear the teacher spout something like, "Studies show Liberals are smarter than Conservatives." For a long time, that appeared true, Conservatives just had to sit and take this silly gibberish and have their self esteem destroyed by Teachers that would push utterly false narratives. However, we Conservatives are now liberated from this falsehood, New studies from the University of Nevada and the Journal Intelligence have utterly debunked this lie.

The definition for this belief style, of Socially libertarian, but economically Right wing, or better put, Pro-freedom in the bedroom and in the workplace, is Classical Liberalism. The fact is that the Republican party was founded on Classical Liberalism, and still is a Classical Liberal party for the most part. Conservatives today often tend to be Classical Liberals rather than traditionalists and this is why Social Scientists were so flabbergasted when they chose to look at IQ averages for Republicans versus Democrats. Almost all Scientists had reached the consensus that clearly the liberal Democrat party would fare better than the conservative Republican party, yet, it didn't work out how they hoped.

In the immortal words of President Trump, this claim by the left is "fake news." These claim that have been based on Traditionalist Conservatives have for so long placed falsehoods upon the entire Conservative movement, however luckily, the Classical Liberal Conservatives have pulled the Republican from the mire of false stupidity claims, and proven what we have known for years, Elephants are some of the most intelligent animals.