Skip to main content
Labels
Posted by Sean Pereksta May 15, 2017

Today, I decided to go on to a platform that has long been forgotten, trampled over continuously by the behemoths of Facebook and Twitter, Instagram and Snapchat, and even probably by Kik. Google +,  perhaps one of Google's few endeavors that did not push the entire internet world forward 10,000 years. As it turns out, there are still fairly vibrant communities alive on Google+, vibrant in relevancy to MySpace that is. One feature that I appreciated was the ability to take polls, one which I put to my own uses.
Without further adieu, I bring you the first ever RightLensNews Google+ Polling article. Todays poll asked everyday internet goers which party they would like to see make the largest gains in the 2018 midterms, The options being Republican Party, Democrat Party, or Third Party or Independent. This Poll is by no Means representative of America as a whole, but it can give us some interesting conclusions to build off of the results. 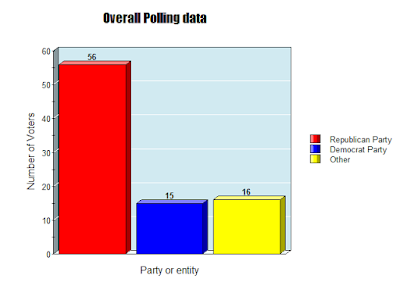 The First clearly notable result is that out of the 87 respondents, well over half of them went for the Republican Party, However before I indulge in conclusion making, it is important that I point out, this data is collected from various different Communities on Google+, some of which clearly have political leanings. 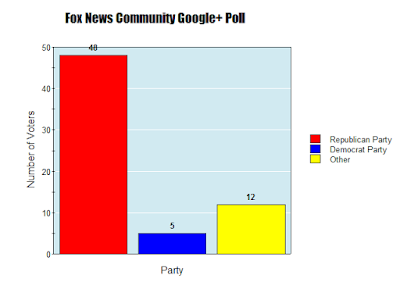 The first and largest poll I conducted was in the Fox News Community, clearly it will lean right, however as I will go through later, the heavy lean to the republican party is remarkable in someways. 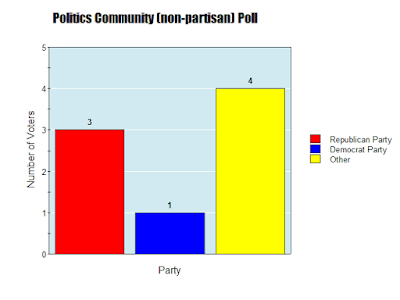 The Second Largest poll conducted was in the Politics Community, I should note, However, that all these polls were started at similar times, and ended at the same time. This poll was conducted in a Community with no declared leaning, and which by visuals alone, looked fairly balanced, however as it would appear, that is not so. 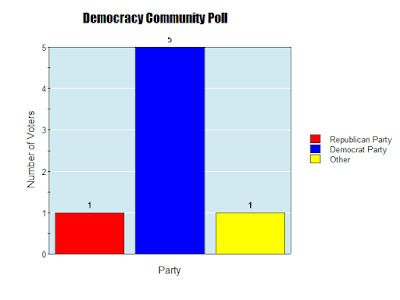 The Third Largest poll, and clearly the outlier in this circumstance was conducted in the Democracy Community on google+, which clearly leans left, and appears to just by looking at the most recent posts, all of which tend to bash Trump or Republicans.

Now when making conclusions, it is important also to note that these communities are not the same size, the Fox News community being by far the largest of the three, with 30,500 members, compared to the Democracy Community with 6,500, and the Politics community with 2,500. Now when adjusting for size, It would be expected that the Democracy Community would have about 13 Respondents, and the Politics community would have about 5 respondents if they were to respond at the same rate as the largest community, Fox News. Why this is remarkable is that it shows that the Politics Community significantly out-performed their expected respondents number, while the Democracy community significantly underperformed.
While these results don't clearly denote anything for certain, it is possible that this sort of result may indicate a higher vigor among conservatives, or more political activism on the internet when it comes to conservatism. Clearly, Fox News members responded disproportionately higher, and went heavily in favor of the Republican Party, than the Democracy Community, which while Leaning left, Responded disproportionately lower than expected. This Result may indicate a growing Right Wing stronghold on certain social media sites. As we all know, in the "great Meme war of 2016", The Republicans took the victory. Republicans not only control the Meme scene which as it turns out, according to google searches, are statistically more popular than Jesus, but in places like 4Chan, Republicans are also dominating. This sort of Internet dominance, which comes directly from a higher willingness to engage in the political arena, at least on the internet, is something that may be heavily indicated by this polling data.

Aside from willingness to engage in Political Activism, other Conclusions can be reached from this Survey, one such conclusion may be the interesting result that the Other option received more support than the Democratic party, Aside from just Republicans, parties like the Libertarian Party and Green Party may also have significantly more sway online then they do in the actual elections. Even in the Politics Community which has no declared leaning and tends to be non-partisan, People were significantly more likely to say third party than democrat. Just by Speculation, it is very possible that The Bernie or Bust democrats are much more likely to say they are Libertarian or Green party now, rather than Democrat, after the clearly unfair treatment of Bernie in the primaries.

Another Significant factor may be excitement for Trump, while this clearly is not expressed by the entire Country, Trump maintains a strong base that won't split away from him for anything, and I think that was put on clear display when the Fox News Community went a solid majority Republican. According to Pew Research, in 2012, Fox News viewership was composed of 40% Republicans, 33% Independents, and 22% Democrats, however in the Results from the poll, only 7% went for the Democrat Party. This may be an indication that the since 2012, Fox News and other media sources have only become more polarized, and more partisan.

Whatever you may think, This is a clear indication that at least on Google+, The Republican Party holds a powerful advantage.


Comment below or Email me at Sean.Pereksta@gmail.com if you have a question that you want me to use as the next polling question.
Labels: GooglePolling