Skip to main content
Labels
Posted by Sean Pereksta May 16, 2017

Second in line for this glorious new series, I conducted two polls in only the Fox News community on Google+, to get their feelings on the Subject of Mainstream media and Fox News' ties to it. The responses were somewhat predictable although as I think you will agree with me on, there may have been a very small amount of trolls, a factor one must always be weary of when conducting polls in social media, even if you are on such an illustrious platform as Google+.

The First Question I will give the results of today, is as follows. Is your connotation of the phrase Mainstream Media, positive, or negative. as many would guess, the results are as follows. 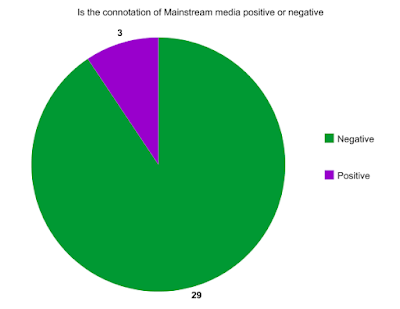 As I stated before, I can only suppose that there must have been trolling because I have never, and probably will never, meet someone, in the conservative community, who calls Mainstream Media positive. Whatever the results were, I still wanted to get an accurate gauge of the Fox News communities feelings towards Mainstream Media, and as you can tell, the feelings are not warm nor fuzzy.

The Second question I gave was as follows. Is Fox News a member of the Mainstream Media. The results are as follows. 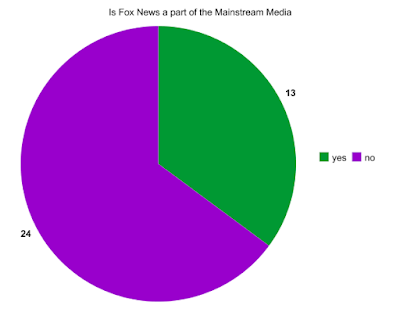 Clearly a bit of a difference here, A larger amount of people stated that they thought Fox was Mainstream, than in proportion to those who stated they had positive connotations of Mainstream Media.

Now with this information decided, its time to build some conclusions. The first and probably most obvious is that a somewhat significant chunk of Fox News viewers are cynical as to their own preferred media source. If a larger percentage of people thought Fox was Mainstream Media, than people who were positive towards Mainstream media, and of course there was a larger percentage, in the area of about 33% versus 10%, then at least 23% of people have a negative connotation of their own news source. This offers a few suggestions, First of all, this may mean that People hold no actual allegiance to their favorite, or preferred new station, but rather only watch it because they can't bear the others. If people in the Fox News community do not like mainstream media, but watch fox regardless of the fact that they think it is mainstream media, that implies that other sources such as CNN and MSNBC are just so hopelessly worse in their eyes, that Fox is a refuge from utter Propaganda or whatever else they think of the other Mainstream Media sources.  Second, I think that this offers another suggestion as well, and that is that Perhaps some people's view of the word Mainstream is different from others, Many may just consider mainstream to mean large and well known, as Fox News clearly is. If that is the Requirements for being Mainstream in the eyes of some, than many may watch and enjoy Fox News, believing it to be Mainstream, but still thinking that the Majority of Mainstream Media sources are negative, Fox, most likely in their view, being the exception to the rule.

However, as remarkable as the third of people who called Fox News, Mainstream Media, are, it is just as important to look at the larger block who believe Fox News to not be Mainstream Media. In this case, this would offer Fox News a sort of power that competitors like CNN, MSNBC, and ABC just can't find. This power would be that of the ability to have viewers that believe them to be the last sanctuary of real news. Mainstream Media obviously getting a bad rap from the Fox News Community, a whole two thirds of the community believe Fox to be clean of that muck, and thus Fox News, to that two thirds would be something of a hero, standing up against the masses of Mainstream Media, and saying it "like it is".  Clearly this is an advantage that warrants loyalty from many of the Fox News supporters, and this also suggests a much stronger staying power, Fox can most likely take a lot of hits, but since it is the last major television news Source that is not classified as just another Mainstream Media source by the majority of its viewers, it will be able to maintain support.

As a final Conclusion in this survey, I would say that, as a relatively new "mainstream" phrase, Mainstream media has clearly lodged itself in the conservative community. With 90% of Fox News watchers stating that they had negative views of Mainstream Media sources, it is very unlikely that CNN and MSNBC are going to be granted any credibility from the conservative masses anytime soon, Fox News on the other hand, only has to grapple with basically every Liberal television star, or late night show host ever, attacking it at every chance they get.

And as a follow up on the last poll conducted, I can state the Fox News community is very heavily in support of Republicans, with 100 votes cast in the Poll, 77 people wanted Republicans to gain more power in 2018, 17 people wanted Third Parties or Independents to make gains, and only 6 wanted Democrats to make gains. Very close to the results released before. The polls of course don't end immediately, and so I continue to have results trickling in, I'll generally post follow up, in the next part of the series.

If you want me to take a poll for a specific question of yours, comment below, or email me at Sean.pereksta@gmail.com
Thank you for reading.
Labels: GooglePolling