Skip to main content
Labels
Posted by Sean Pereksta May 17, 2017

In today's part in the series where we poll people on everyone's favorite Social Media site, Google+. for today's series, we take a look at the Fox News Viewership, by polling the Fox News community, Many of you may be wondering, why is it always Fox news getting polled, Perhaps the reason is that I'm addicted to Fox News, but a more likely story is that the Fox News Community is literally the only Community active enough to get a sufficient number of votes on my polls, sufficient being more than one, and preferably more than two, three, or four.

The questions posed to these Fox Pups((baby Foxes)tied to a particular new station) was as follows, "what would you define your political ideology as", and "does Fox news generally align with your political views". This of course was directed at the Fox News Community, or as I will jubilantly call it the Fox Skulk(group of Foxes) in order to keep the running chain of Homonyms.

As for the Question "how would you define your Political Ideology, here were the fairly predictable results, although Neocons were nowhere to be found. 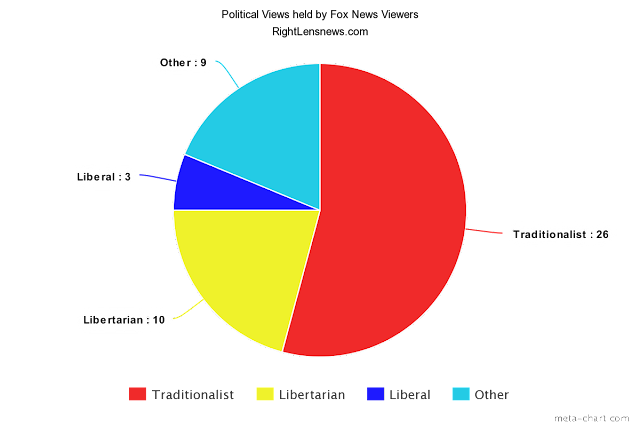 As you might see from this chart, There is an awful lot of Traditionalists on Fox News. Sadly to me, not quite as many Libertarians.

For the second question, People were asked how often their political views aligned with Fox. 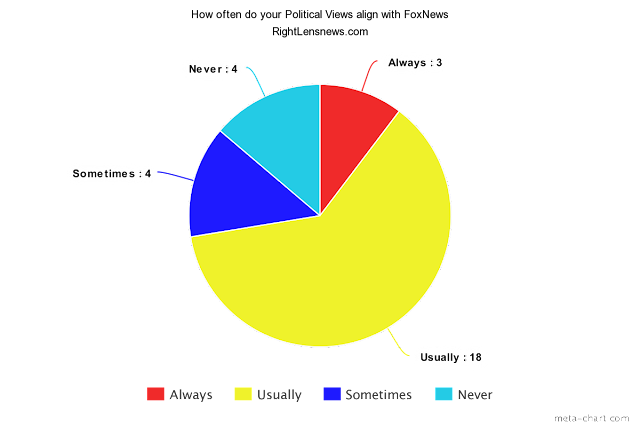 Another Predictable Result as you may see, while there were three utter loyalists to Fox, The results were mainly people who just generally aligned but had a few qualms, with a couple people who either only sometimes agreed with Fox's overall agenda, or were completely against it.

Traditionalists have "traditionally" been the major viewing block of Fox News and the major voting block of the Republican Party, however it is interesting to note that Libertarians made up the second largest block, outpacing Other which I would suppose is most likely moderates. Libertarians have increasingly been leaning towards the Right as their party becomes better known among Millennials who are fiscally conservative but socially liberal. This would suggest that Libertarians are increasingly becoming a card in politics as they have only recently actually become a voting block, yet they already make up the second largest block of Fox Viewership, which is obviously by far the largest Conservative News station. With Libertarians becoming a larger base in the Republican Party, and Trump becoming the President, We may begin to see a real shift away from Neocons, and traditional Republican stances, and into a slightly more authoritarian Libertarian party where things like Gay marriage are more widely accepted. This shift could be hugely detrimental to the Democrat Party because the reality is, there is a large amount of people who find the Republican Party to be better suited to dealing with a fragile economy, but find some of the purported aspects of the Republican party to be unpalatable.

Another thing to note is that almost 3/4s of Fox Viewers almost always agreed with Fox news, or 100% agreed with everything Fox says. Once again, going back to the last addition to the series "Google+ Polling", there is a clear Loyal base of Fox that other News stations just don't have, I personally find CNN, ABC, and MSNBC to be generally interchangeable but finding a replacement for Fox is a much, much, more difficult task.

That's all for now, I want to Remind you, that you can influence the next addition to the series by offering suggestions as to what I should ask as my next questionnaire down in the Comments below, or by Emailing me at Sean.pereksta@gmail.com.
Thank you for Reading
Labels: GooglePolling