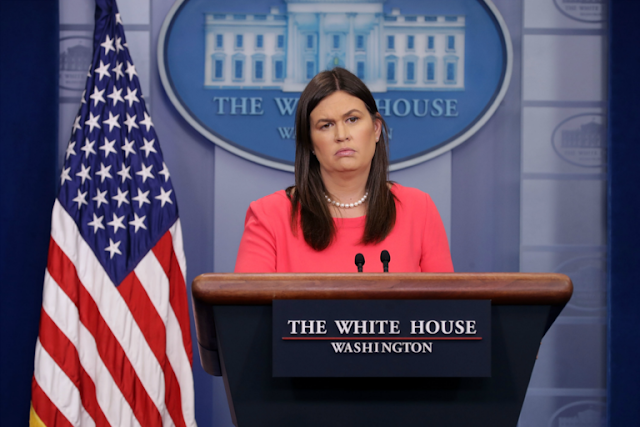 On June 22nd, 2017, Sarah Huckabee Sanders entered a restaurant in Lexington, VA, and was refused service when the owner realized she worked with President Trump. She responded with this on twitter the morning after.

"Last night I was told by the owner of Red Hen in Lexington, VA to leave because I work for @POTUS and I politely left. Her actions say far more about her than about me. I always do my best to treat people, including those I disagree with, respectfully and will continue to do so"

Vox, as "woke" as it is, quickly leaped at the opportunity to be able to show Mrs. Sanders as the hypocrite she really is. Laura McGann writes for Vox saying "Sarah Sanders is upset a restaurant wouldn't serve her. She's OK with it happening to gays." Immediately Laura draws a false equivalency between Sanders and what has happened to gay men in the case where two men were refused when they asked for a specially designed cake for their gay wedding from Masterpiece Cakeshop. Laura implies that Sanders and the gay couple reacted in the same manner when they were refused service and therefore she tries to paint Sanders as a hypocrite for being "upset" when she is refused service. The idea that there is an equivalency between the case of the gay couple and Sanders that Laura implies is ridiculous for three reasons.

1: The Masterpiece Cakeshop did no refuse all services to the gay couple, unlike the restaurant, it merely stated that it wouldn't design a special cake for a gay wedding.

2: Secondly and much more importantly, Laura tries to argue that this upset Sanders and since shes upset, shes a hypocrite because she let the same thing happen to gays. The biggest difference here is when Sanders left, after being asked to leave, she didn't file a lawsuit, she respected the business owners decision to do with her business how she pleased, Sanders merely used her first amendment right to express disapproval of what happened, she didn't call on the government to force itself into the Red Hen and take away it's right to serve who it pleases.

3: Masterpiece Cakeshop was asked to service an event that it didn't agree with, meaning it would have to create cakes and decorate them in a manner that went against the Cakeshop's christian beliefs, Sarah Huckabee Sanders was refused on the grounds of only her political views, the restaurant was not about the be forced to make food in the shape of a Republican elephant, it would not be forced to express beliefs that went against its core values, unlike the Masterpiece Cakeshop that was asked to bake a cake that represented something that the store-owner, Phillips, believes is immoral.

Furthermore, Laura shallowly argues that Sanders, through her aforementioned tweet, is only fanning the flame between the "White House's base and everyone else." Really the only way one could infer that Sanders was attempting to "fan divisions" is to come at the tweet from the perspective that Sanders is a horrible person because there is nothing in Sanders tweet that would seem divisive to any normal onlooker. She was refused service based on her political views and so she says she "politely left" and that the owner's actions say "far more about her than about me", just to dispel this fairy tale that Laura spins, Sanders goes on to say that she always does her best to "treat people... Respectfully and will continue to do so".

The Vox article by Laura McGann draws a false equivalency between Sanders and the plight of a gay couple, ignoring the fact that Sanders was disappointed but never tried to bring in the government into the situation, instead deciding to "politely" leave. Vox attempts to portray Sanders as a hypocrite in its own crusade against the Trump administration where it wildly grasps at every opportunity to paint public servants such as Sanders as hypocritical bigots. interestingly enough, the same first amendment that Laura clearly thinks should be usurped in order to allow the government to force people to serve things they find immoral, is the amendment that gives her the right to criticize the current administration at the head of the government.