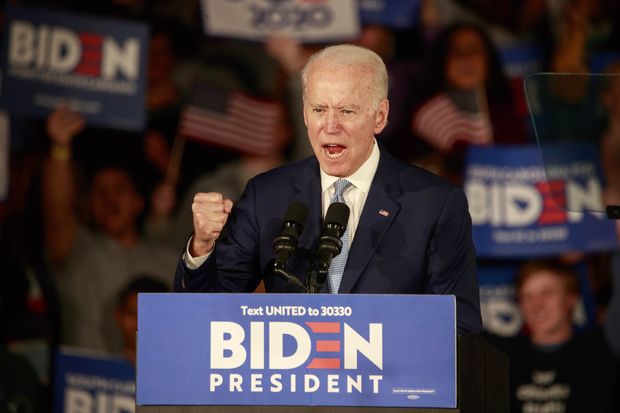 After having hauled in rather pedestrian results in the first contests for the Democratic nomination process, former front-runner Joe Biden landed a massive win in South Carolina. On Saturday's primary in South Carolina, Democrats across the state voted on who they thought should represent their party in the general election, and Biden swept the competition. By nearly a 30 point margin, Biden crushed Sanders who only days beforehand had been closing the gap between the two in numerous polls.
On February 3rd, preceding the Iowa Caucus, Joe Biden enjoyed a 17.4% lead over his closest competitor, Bernie Sanders according to the combined averages of polls compiled by FiveThirtyEight. Following the Iowa Caucus, as well as contests in New Hampshire on February 11th and Nevada on February 22nd, Biden's lead dropped precipitously, reaching a low point of averaging just 23% in polls of democratic voters in South Carolina, just 2 percentage points ahead of Bernie Sanders who averaged 21% on February 22nd, well within the margin of error in most polls. Momentum seemed to be entirely on Sanders side with headlines like "Voters see Sanders as best candidate to beat Trump" and "Bernie Sanders' revolution is coming . and his rivals are falling behind". Around this time, Bernie surpassed Biden in national polling, making Biden fall to second place for the first time throughout his entire campaign. Suddenly Biden being the presumptive Democratic nominee was no longer a forgone conclusion but rather his campaign was in serious danger as Sanders became the favorite to win the nomination. As Biden began a near free fall in polling, even drawing even with Bloomberg in some polls, the press seemed very quiet aside from the constant resounding of trumpets announcing Sanders assent to the White House. There was very little coverage of Biden's campaign aside from a few humorous gaffes here or there.
In South Carolina, the Media extensively covered the polls which showed Sanders nearly polling evenly with Biden, often within the margin of error. This seemed to be the prelude to the ultimate demise of Biden's campaign. South Carolina was Biden's firewall, even if he performed poorly in Iowa, New Hampshire, or Nevada, South Carolina was going to be the safety net that would prevent the collapse of his campaign's momentum. In the days leading up to the primary, that theory seemed to have fallen flat, Biden had fallen in 4th place in Iowa, 5th Place in New Hampshire, and a very, very distant second place in Nevada. Furthermore his polling was plummeting in South Carolina. With a last second endorsement, third ranking house member, Jim Clyburne offered his support to the Biden Campaign and in the last two days of polling, Biden's average once again jumped up to a double digit lead in South Carolina.
However despite the jump in polling that Biden received, the 19% advantage he enjoyed in polling is still a far cry from the 29% victory he earned over Sanders. The questions then are how did Biden's support swell so quickly in those last couple days, where did the support come from, and why did those voters end up backing Biden instead of their previous choice?

Certainly Clyburne's endorsement of Biden was impactful. But was Clyburne's endorsement more of a wake-up call to an event that was already bound to happen. What appears to have happened is the collapse of all but one moderate candidate, Joe Biden. Steyer lost a large chunk of his support and dropped to 11.3% after having at one point been in second place with 18.5% support. Steyer certainly represented the moderate element of the Democratic Party, similarly Buttigieg saw 3% of the primary voters part ways with him and Klobuchar also lost nearly 3% of voters. Now there is certainly nuance to where those missing voters went, perhaps some went to Warren, maybe some had their second choice as Sanders. But undoubtedly, most of the voters backing these more moderate candidates did not have their second choice as Sanders or Warren who represent the more progressive wing of the Democratic Party. in all likelihood, Biden was their next choice, and the results seem to bear that out as Biden had an 8.7 point jump in the final results. Now the combined total of lost votes from moderate candidates is 7.1% which suggests that some percentage of Sanders supporters also went to Biden or the polling sample simply wasn't fully representative of those who actually turned out to vote.
What Saturday's South Carolina Primary was representative of is the convergence of the moderate wing of the Democratic Party around one Candidate, Joe Biden. With Steyer, Buttigieg and Klobuchar having dropped out of the race as of Monday, March 2nd, There is almost bound to be a movement towards Biden in the polls. How large that movement is will certainly be difficult to predict but if its enough to sway a couple of Super Tuesday states, then Biden could very easily regain his status as front-runner.
In Texas, Sanders currently leads with 29.5% of the vote, Biden stands in second at 24.2% and Bloomberg and Warren are at 16.8 and 12.2% respectively. Interestingly the most recent polls containing Buttigieg had him at around 8% support and Klobuchar at around 5-6%. assuming that the majority of their support goes to Biden, suddenly the race is very close.
Morning Consult released a poll conducted between February 22-27 which showed 21% of Buttigieg supports said their second choice would be Sanders, followed by 19% going to Biden, 19% going to Warren, and 17% going to Bloomberg. This of course was used by advocates of Sanders campaign to show his "widespread" appeal. However, there is much more to this poll as the remaining 24% of Buttigieg voters, were either undecided or going to Klobuchar. Amy Klobuchar however has dropped out and endorsed Biden, furthermore recent reports suggest that Buttigieg is set to endorse Biden, and the aforementioned Morning Consult poll appears to be more of a double edged sword to the Sanders campaign as embedded in its questions is the result of 63% of Buttigieg voters saying if Buttigieg were to endorse Biden, they too would back Biden.

Based on the endorsement of Klobuchar and the impending support of Buttigieg supporters, it is almost a certainty that Biden will get a much larger boost in the polls than Sanders. Furthermore, with Bloomberg stagnating in the polls, it is possible that when Bloomberg supporters arrive at the voting centers, they will be faced with the question of whether to lend their support to Biden, or vote for Bloomberg and let Sanders, someone whom Bloomberg has voraciously attacked on the campaign trail, win. This may also sway significant chunks of Bloomberg's support and I believe it already happened in South Carolina where so much support for the many moderate candidates seemed to converge around Biden, many voters having left their first choice for a more viable second choice. Based on this, While Sanders still is the leader in the Democratic Primaries, his lead is not insurmountable, and he certainly isn't in the drivers seat yet.
States like Texas, North Carolina, and even possibly Virginia which all seemed to be trending towards Sanders, may fall into Biden's column by the end of Super Tuesday.
Labels: America Democratic Primary Left Polls